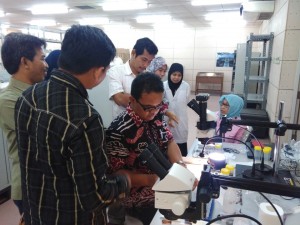 Staff members of the MZB participating in a training course on DNA barcoding.

The ZSM is currently running a training course at the Museum Zoologicum Bogoriense (MZB), Research Center for Biology – LIPI in Cibinong, Indonesia. The IndoBioSys coordinator at the ZSM, Bruno Cancian, is instructing Indonesian project partners to process voucher specimens according to a standardised protocol that was developed by the Canadian Centre for DNA Barcoding (CCDB) in Guelph, Canada. The procedure is part of a high-throughput workflow that was established at the ZSM as part of several large-scale DNA barcoding projects, including the Barcoding Fauna Bavarica and the German Barcode of Life projects. The optimised workflow enabled the ZSM to process nearly 200.000 specimens since the first barcoding projects commenced at the ZSM about 10 years ago.

The preparation of voucher specimens for DNA barcoding involves image capture, recording of collecting data, sampling (leg picking), and transfer of samples to PCR plates that are subsequently processed at the CCDB. The data are maintained and managed using the Barcode of Life Database System as database management system that allows Indonesian and German project partners to access and analyse the data as soon as they are available, anywhere and at any time.

Specimens for barcoding were obtained during an expedition of Indonesian, German, and British specialists. Most of the material, primarily insects that comprise the largest number unknown organisms in the Indonesian fauna, was collected using Malaise traps. These traps are the most efficient method for obtaining a lot of insects in a very short time frame.

IndoBioSys project is a joint project of the ZSM in Munich and headed by the Museum für Naturkunde in Berlin on the German side, and the MZB/LIPI on the Indonesian side. The project is funded by the Federal Ministry of Education and Research and the Indonesian State Ministry of Research and Technology. It aims at establishing a novel high-throughput biodiversity discovery pipeline that is based on DNA barcoding as efficient means to assess the biodiversity of a region that is among the world’s top biodiversity hotspots.